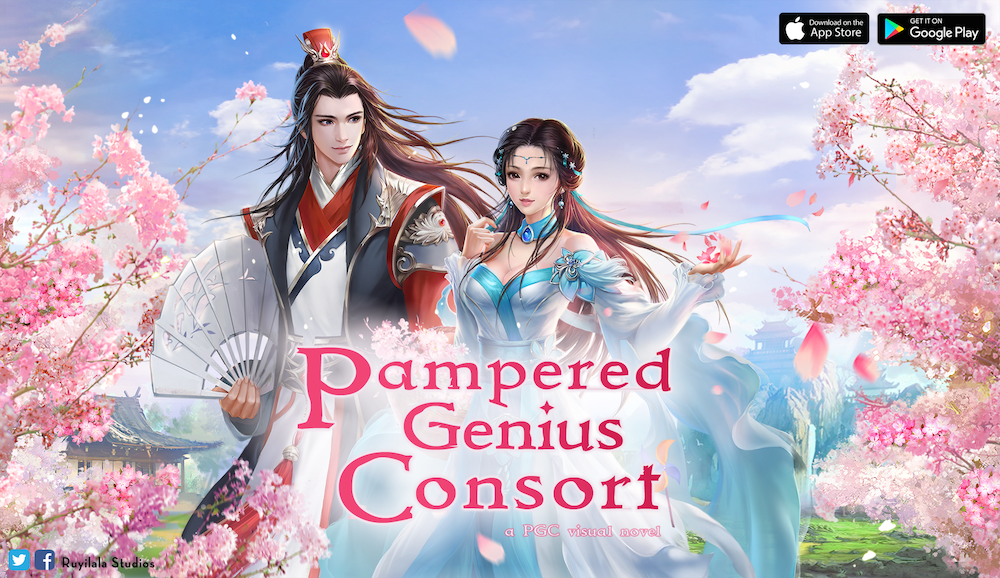 The joke used to trick readers included a promotional poster with fake Apple Store and GooglePlay icons, as well as the fictional 'Ruyilala Studios' listed in the bottom left hand corner.
Picture taken from volarenovels.com
By Thomas E. Weber

Popular Chinese webnovels translation site volare novels is currently under scrutiny after one of its translators was found guilty of faking a visual novel adaptation for the series Poison Genius Consort (PGC).

The culprit, series translator Ruyi, also made a fictional Twitter (@pgc_vn) and Soundcloud accounts to sell her scam. Readers who clicked on the links were directed to realistic updates about the upcoming game and working music from Pampered Genius Consort's 'original soundtrack.'

Authorities took Ruyi into custody at her home last night for multiple counts of copyright infringement. She was forced to phone her colleagues to post her "daily PGC chapter, to stave off the cliffhangers!" Further attempts to reach Ruyi were unsuccessful.

This is not the first time Ruyi has pulled such pranks. In 2018 she created a fake drama adaptation announcement for her series Falling Dreams of Fang Hua, complete with music video. She was also the producer of volare Beauty 2018 and has misled her readers with various tricks and comments in the past regarding her projects.

Sign up to receive the top stories you need to know right now. View Sample
Sign Up Now

Reactions to Ruyi's unexpected incarceration have been mixed.

"Lock 'r up!" says WeirdWhirl, volare author of original series The Dao of Magic. "How dare that monster tarnish our noble and morally upright site with falsities such as these!"

Meanwhile, members of PGC's Discord-based snu snu sect [sic] are reported to be panicking after news of their translator's lock-up leaked out. Protests have been staged around local jail cells around the world to draw attention to Ruyi's plight. Popular slogans include: 'We Want SNU SNU!', 'Not Another 84 Years!!', and 'At Least Let Ruyi Translate the Make-Out Chapter First!'

General Yuuko, volare marketing team member and honorary second-in-command of the sect, was unavailable for comment at the time of this article.

"There's a certain resignation that surrounds April Fools'. You live through the day expecting to be tricked, and move on after being fooled with," says sociology expert May Fair of the American Sociology Association. "It's become a cultural norm by now."

However, in a medium where letters and print rule the page, media derivatives such as comic, screen, or visual novel adaptations overwhelm the viewer in subliminal sensations of color and sound that makes the eventual revelation a crushing letdown.

"Saying it was only a joke is just cruel here," Fair explains. "She's [Ruyi] not unmasking the truth, but ripping the skin off people's faces." While there are no recorded counts of broken hearts from Ruyi's ploy, some readers have already stepped out to voice their dissatisfaction.

"After falling in love with a certain legless girl from my first ever visual novel years ago, I was ready to try loving again," says one anonymous reader. "I had my credit card at the ready, chomping at the bit for any hint of a release day trailer or playable demo. The sadness and anger I felt when hearing that it was but a ruse made me fall into a apoplectic depression." The reader went on to add that he would be suing the "monster named Ruyi" for five hundred million dollars' worth of emotional damages.

IDEAS
TIME Ideas hosts the world's leading voices, providing commentary on events in news, society, and culture. We welcome outside contributions. Opinions expressed do not necessarily reflect the views of TIME editors.
Sponsored Stories
Recommended by

Born After 1943? You Could Collect An Extra $890.07 From The SSA
Seven Figure Publishing

Here are the top 6 dividend stocks you can buy and hold forever.
Wealthy Retirement

Transfer Debt, Pay $0 Interest Until 2020 With This Insane Credit Card
The Ascent

Sign up to receive the top stories you need to know now on politics, health and more
SUBSCRIBE
this link is to an external site that may or may not meet accessibility guidelines.